THE MOLE WITH GLASSES

Once upon a time there was a mole called Molly, who lived in a field in the middle of nowhere. Lots of other moles in her family lived there, too.

The moles usually spent their time digging holes in the earth and hideouts hidden under the ground. Although moles have an excellent sense of smell, their sight is very bad and they can barely see beyond their noses.

Molly was a very special mole, for she had decided to wear glasses to see better and therefore be able to dig tunnels more quickly. All the moles in the field laughed at her for this, and she felt very depressed. 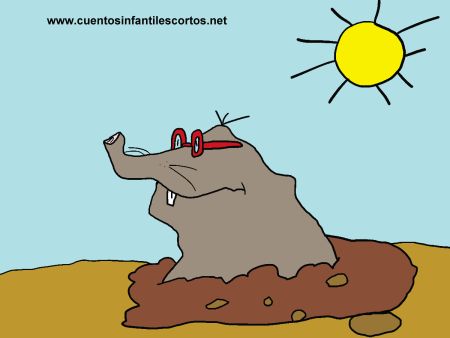 But one day the Mole Olympics were held in the field, and Molly put herself forward for the event of “most extraordinary digger.” This consisted of digging a tunnel more than two kilometres long, leaving from one point in the field and arriving precisely at that same point through the tunnel.

At the end of the competition, the winners of each event were announced and to everyone’s surprise Molly was crowned champion of “most extraordinary digger.”

Molly had been the only mole to dig exactly to the point she had started from – all thanks to her glasses. This made the other moles understand that Molly was a normal mole, just like them. The only difference was that she didn’t mind wearing glasses, which had helped her win the Mole Olympics, and maybe could even help save her life one day…

Next ArticleFLEUR AND THE PHOTOSYNTHESIS