Lina was a gifted girl who became an astronaut when she was only 6 years old. This is how she made her dream come true, that of visiting different planets and moons in outer space.

One day as she was travelling through space, she came across a Martian who told her that planet Earth was in danger as some evil asteroids were planning to attack Earth. 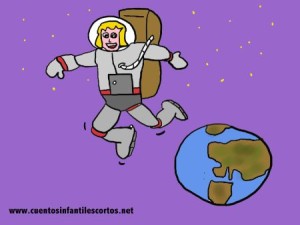 Lina and Chuli the Martian became friends and made plans to save planet Earth together. Chuli convinced his fellow Martians to help them, and Lina tried to warn the authorities on planet Earth.

“Leaders of planet Earth, I have a message for you,” Lina said. “Earth is in great danger, but I have a plan to save it.”

First there was a great silence, and after a few seconds the leaders of Earth started laughing: “Ha, ha, ha! You have no idea little girl, do you? Ha, ha, ha,” they all laughed.

Suddenly, Chuli arrived and faced the leaders of Earth in his Martian spaceship. Everyone was perplexed, including Lina who couldn’t believe her friend would stand up for her.

After Chuli landed his spaceship he said: “Dear earthlings, I have become familiar with your planet thanks to Lina, and I just wanted to let you know that we Martians are going to help you save the Earth.”

All the Earth’s authorities thought the same thing: “We should have believed Lina, and we shouldn’t have laughed at her just because she is a girl. Lina is a very smart girl and we owe her our respect.”

The Earth’s leaders regretted not having paid attention to Lina and decided to give her their undivided attention. “Lina, what is your plan to save the Earth with the help of the Martians?” they asked.

Lina told them her plan, and with Chuli’s help they managed to save the earth from the evil asteroids.

Lina was always grateful to her Martian friend especially when he had stood up for her in front of the Earth’s authorities.