Once upon a time, there was a 7 year old boy named Mike.  One day, as Mike was walking through the playground at school, he found something half buried in the dirt.  He took a good look at it but was not able to recognise what the object was. 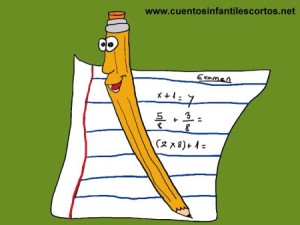 He decided to take the pencil with him, even though it hadn’t been a great discovery.  The next day, he took the pencil to school without realising that it was no ordinary pencil, the pencil was actually very special.

That day, Mike’s Maths teacher decided to give them a surprise quiz.  Mike had not studied his maths as he was a little bit lazy when it came to his studies, and his grades were proof of that.

But something amazing happened during the quiz. Mike didn’t know any of the answers, but the magic pencil kept moving around the page solving each and every one of the maths problems.

“This is impossible!” said Mike.  “Mike, if you talk again I am going to have to fail you” said his Maths teacher.

Mike was the first to finish the quiz.  He turned it in, took his pencil, and went straight to the playground to play.

A few days later, the Maths teacher had graded the quizzes, and she returned them to the students. Everyone was surprised to see that Mike had scored a 10 out of 10.

Mike was very happy with his grade, but the more he thought about it, the more something didn’t feel quite right.  “Why am I so proud of myself?, I really didn’t do anything, this old pencil did all the work for me.”

For 15 minutes, Mike thought long and hard, whether it was right or wrong to use the magic pencil again to take his tests effortlessly. He decided never to use it again, as using it meant cheating and lying to everyone else and to himself. Using the pencil again meant he would never make any effort to study or work hard.

That is how Mike figured out that hard work is what helps you to be proud of yourself when you want to achieve your goals.  It is not fair to get the same grades as your classmates without having studied.