Once upon a time there was a musician called Jonas who used to compose songs at home with his recording equipment which included new microphones and loud speakers that he had just bought. Everything he loved was inside the “music room”.

One day, Jonas was recording a new song in his music room when a strange noise sounded from one of the new loud speakers. 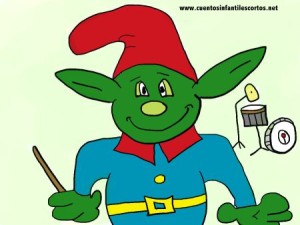 Jonas didn’t think much about it and continued tuning his instruments for his new song.

But after a few minutes he heard the noise again. “It seems like there is someone inside the loud speaker” – thought Jonas. So he checked the loud speakers but didn´t find anything and so continued working.

He continued to compose his song, for a long time in the quiet of his room, but suddenly he heard the noise again! This time louder and he saw a tongue coming out of the loud speaker! He knew for sure there was somebody inside.

Jonas then made a plan to catch whoever was hiding inside the loud speaker. He sat beside it and played his instruments. When the noise sounded again, Jonas grabbed the tongue and pulled it.

“Got you!”- shouted Jonas, but he could not believe was he saw. “It’s an elf!” – shouted Jonas very scared when the magical creature came out of the loud speaker.

Jonas asked in surprise, “What are you doing inside my speaker?”

“It´s a long story,” – said the green elf – “I was in a band a long time ago, I was the famous elf drummer, but one day we had an argument and the band broke up. I was really depressed, so I went into the loud speaker to forget about it. The noise you heard was my sobbing, I have been crying for years but nothing has changed”.

“You have spent too much time crying inside the speaker, but don´t worry, I have a good idea” – said Jonas – “I have composed electronic music, but I was thinking of putting a band together, so you can be my drummer!“.

The magic creature was very happy, he had found a new friend who had taught him how to enjoy life without sinking into gloom when something goes wrong.

Jonas and the elf became a famous band that toured the world for many years, and they became the best of friends forever.