THE BIRD AND MR. RED HEART

There was once a bird called Hawthorn, who loved to flutter about near the electrical cables that exist in lots of towns. In particular he liked to be near the lamp posts, because it was nice and warm there and the birds had somewhere to perch.

On the cables there was a strange red object, which the birds called “Mr Red Heart“. This peculiar red heart was as round as a ball, and as red as a pepper. There were other red hearts scattered across the cable, which attracted the birds’ attention.

One day, another bird called Lucas (who was known to tell lies), told Hawthorn: “You have to be very, very nice to the red heart, for he saves us from hitting the cables.” 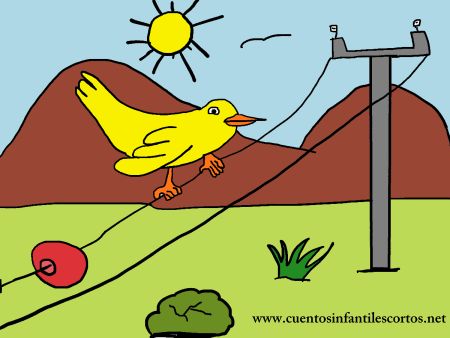 Lucas was right about one thing: the red heart told the birds that there was a cable there so they wouldn’t fly into it, for the cable isn’t very visible in the air. In fact, humans call the red heart “bird guards“.

Hawthorn, who was amazed that a piece of plastic could be so powerful, didn’t believe him. But Lucas insisted and said: “Do you see that dead bird on the ground?” and pointed at a bird below the lamp post. Lucas went on: “Well, he was killed by Mr Red Heart, because he didn’t respect him enough.”

In reality, the bird on the ground had been unlucky enough to touch two parts of the lamp post that were charged with electricity, and he had been electrocuted.

Hawthorn was scared and worried, and began to believe Lucas’s story. So he asked Lucas how he should pay his respects to Mr Red Heart. Lucas pretended that he was Mr Red Heart’s agent, and told Hawthorn that he should pay Lucas 10 breadcrumbs every week.

But clever Hawthorn began to be suspicious and realised that it was very strange that you had to pay Lucas just so as not to displease Mr Red Heart. So he decided to investigate how genuine this Mr Red Heart actually was.

He asked the wisest birds in the area why the bird on the ground had died. And the wise birds told him the truth: he had been electrocuted.

Before Hawthorn finished his interesting conversation with the wise birds, they told him: “And remember, never let yourself be tricked by someone who says you should be scared of something, but doesn’t give you any proof that what he says is true.”

So Hawthorn never trusted Lucas again, for he had discovered that Lucas had been trying to deceive him.