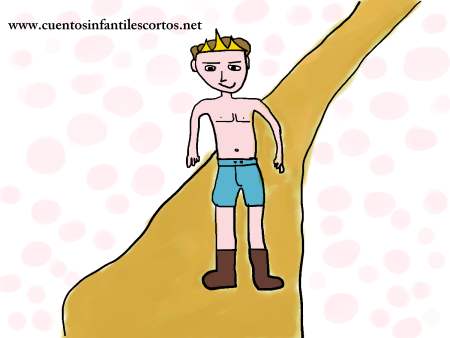 “I would then be able to discover which men in my empire are unfit for their posts” – thought the Emperor – “and I could tell the wise men from the fools”.

They set up two looms and pretended to weave. There was nothing on the looms, as all the finest silk and expensive fabrics went into their bags, whilst their worked their empty looms far into the night.

The Emperor sent his old minister to the weavers: “He will be the best person to tell me how the material looks” – thought the Emperor.

The old minister went into the room where the two swindlers were sitting working away at their empty looms. The old minister couldn’t see anything, but he didn’t say so in case they though he was stupid.

“Tell us what you think of it?” – asked one of the weavers.

“Oh! It´s beautiful, such a pattern, what colours! I’ll tell the Emperor how delighted I am with it”. – said the old minister.

All the town were talking about the Emperor´s splendid cloth, until he wanted to see it for himself. So he set out to see the two swindlers. He found them weaving with might and main, but without a thread on their looms. “Oh!, it´s very pretty” – said the Emperor so as not to look a fool – “It has my highest approval”. Nothing would make him say that he couldn´t see a thing.

His whole retinue stared and stared. One saw no more than another, but they all joined with the Emperor in exclaiming, “Oh! It’s very pretty,” and they advised him to wear the clothes made of this wonderful cloth for the great procession he was soon to lead.

The day of the procession arrived and the emperor went to put on his new wonderful suit.

The Emperor led the procession in his splendid new clothes. Everyone in the streets and at the windows said, “Oh, how fine are the Emperor’s new clothes! Don’t they fit him to perfection? And see his long train!” None would confess that they couldn’t see anything, for that would prove him to be either unfit for his position, or a fool.

The Emperor suspected they were right, but continued to lead the procession walking more proudly than ever under the illusion that anyone who couldn´t see his clothes was fool, as his noblemen held high his imaginary mantle.

Share this Classic short story for kids with your friends on Facebook, Google +, or Twitter with the buttons you’ll find at the end of the story. Thank you!