THE DAY AND THE NIGHT

There was once a planet called Earth, half of which was night and the other half was day.

Five-year-old Julia had realised that during the day there was light but that at night everything went dark. One evening, Julia was reading a bed-time story when her mother came to give her a kiss and wish her goodnight. “Night night, Julia, sweet dreams,” said her mother as she tucked her in. “Mummy, why is everything dark at night and there’s no sun?” asked Julia.

So Julia’s mother sat on the edge of the bed beside her and said: “Ok, tonight I’ll tell you a story about night and day, and then I’m sure you’ll understand why they exist.” 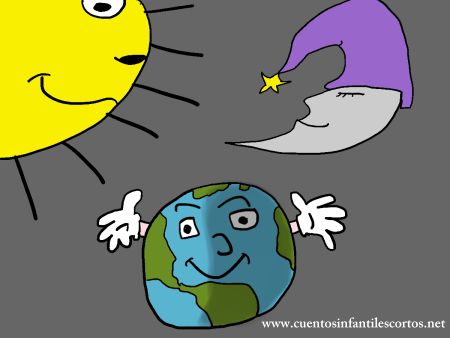 Julia was very eager to hear the story, because it would help her understand lots of the questions she had about the sun and the moon.

Julia’s mother started her tale. “A long time ago, the planets were created and among them was the planet where we live, called Earth. Our planet is like a spinning top, but there’s one difference: Earth spins more slowly; in fact, it takes 24 hours to go round once. That’s why it’s called earth rotation.”

All this while, Julia was listening hard to everything her mother told her, for she had never heard anything about the planets and the sun. Julia’s mother continued: “So as Earth spins around, the sun will shine its light on one side of it and it will be day. But the side facing away from the sun will be dark, and that means it’s night-time. So while it’s day on one side of the Earth, it’s night-time on the other.”

After the story, Julia understood that day-time is when the sun gives us light because we are facing it, and it becomes night-time as we move away from the sun’s rays.

Today Julia had learned something she didn’t know before, and even though she was only a little girl she sensed that what her mother had told her was very important for all the inhabitants of Earth, for thanks to the sun there is life on our planet.