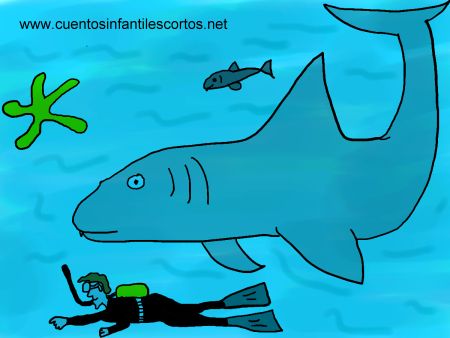 In the beginning, Alberto didn’t really understand him very well, but gradually he began to interpret Freddy’s gestures and movements. Over time he learned lots of things, such as the fact that Freddy didn’t like eating humans and that he usually ate only the diving flippers sometimes worn by reckless swimmers when his group went hunting.

Everything remained calm until one day he realised that Freddy was sending him an important message: “Leave this place, Alberto. My fellow sharks are planning to eat you…”

Alberto was so scared by what Freddy had told him he decided to speed up his plan… So he talked to Freddy, and told him: “Freddy, I know you’re a good shark and that you don’t like eating humans. So I think that you should protect the beach from the group, so they won’t attack anyone. And in return I’ll bring you a pair of divers’ flippers every day.”

Freddy liked the deal, and in a short time he managed to persuade the rest of the sharks to leave the beach alone. And so the beach was re-opened to the public, and Freddy was named the beach’s official shark protector.

Next ArticleTIP THE CURIOUS ANT