Lily was a beautiful hare who loved to play with her friends. Their favorite game was “racing, run, run” (that´s what they called the game).

One day she found a firework with a long wick and had an idea. 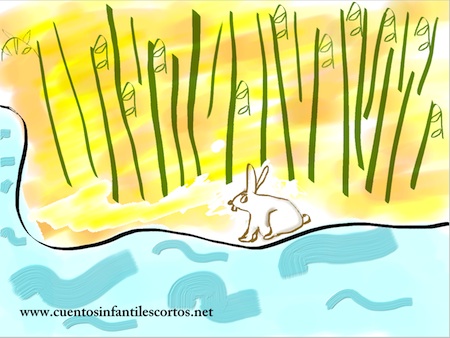 The race day arrived and Lily had a little secret. She had hooked the fireworks onto her back.

After the start signal Lily ran faster than ever. Her friends were left way behind with their mouths open, it was unbelievable!

Suddenly Lily began to scream, running from one side to other, around and around and she hit her head on the trees and plants. Then she ran towards her friends and they tried to escape from her.

Finally Lily stopped and collapsed exhausted while her friends looked on, astonished. That’s when she decided to tell them the truth which her friends did not like very much.

Lily had learnt a lesson and understood that if she kept lying to her friends they would not trust her anymore.

New Short Story written by: Anonymous. A sixteen months kid´s ability is causing a stir in Europe. The Manchester United from England, wanted to sign him up. The kid is called Matjaz Kranec and is from the Slovenian city called Maribor. The world is new for Matjaz, like for any other new kid. He has…

Short Story for Children written by: Agustin (10 years old). It was a quite monday in spring, a normal day, but for Arnold was a big day. It was the day of the important match, the match to decide which was the best team of the school year. The players of his team were: Arnold,…

Short Story written by: Ramiro García Martin decided to play in Brazil for at least two more years to relax with his girlfriend and not think about moving away. Days later, he went to visit Argentina, to visit the places his friends had recommended him. He went for a week because he had a friendly game…

Short Story written by: Ramiro García. Once upon a time, there was a boy called Martin living in England, and his dream was to play for a professional football team in his country. He actually played for his neighbourhood team, and worked hard to improve every day so that he could one day reach his dream.…