Once upon a time there was a low-energy light bulb who sometimes got annoyed when he was switched on… Mr. Graham, the owner of the house, couldn’t understand its behaviour, because he had been told it would last a long time and save energy.

One day, he invited some friends to dinner, Robert and Isa. It was quite a sunny day, but the Graham family had switched on all the living room lights for the meal, and the grouchy light bulb was among them.

Robert realised that the light bulb looked angry, for it flicked on and off constantly. So he asked: “Hey, Graham, I think your light bulb is annoyed. Have you noticed?!” 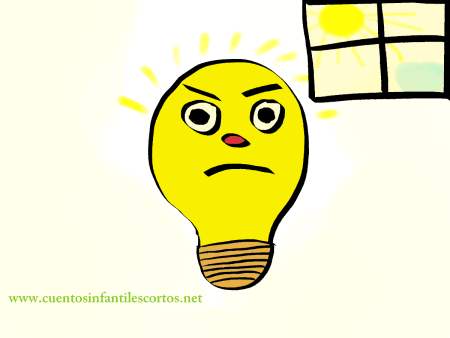 Mr. Graham replied: “He gets annoyed and goes out every time we switch him on. I don’t know why, because we only bought him a little while ago…”

It suddenly dawned on Robert what was wrong, so he said: “I know why.  It really bothers him that you switch him on when it’s daylight outside, because it means you’re using unnecessary electricity.”

Finally, the Grahams understood that they had to control their use of energy: to help to look after the environment and spend less money on electricity they mustn’t turn on the lights during the day.

So they switched off the lights, and continued their meal in daylight and “the grouchy light bulb” was delighted and beamed.